Mary Jane Truby was the first-born child of wealthy farmer and landowner Simon Truby of Apollo PA. So you might have expected that she’d be destined for a life of privilege & ease. But Mary Jane Truby’s life instead seemed marked by heartbreak and tragedy. Though she’d married into another prominent local family—the Henrys—the secure life that Mary Jane and her husband tried to build for their children had crumbled away before their eldest child had turned 16.

Mary Jane’s first significant loss occurred at age 6, when her mother Sarah Woodward Truby died in 1844—just months after Simon Truby had purchased his 156-acre farmland in today’s Apollo & North Apollo. Mary Jane and her 4-year-old sister Juliana were left in the care of their widowed 38-year-old dad, Simon Truby (1806-1886). Simon had remarried by about 1850 and proceeded to have 7 more children over the next decade-plus with his new wife, Elizabeth Hill Truby. As the oldest child, Mary Jane likely took on a caretaking role for her many younger half-siblings.

In 1850, twelve-year-old Mary Jane and her 10-year-old sister Juliana were living in the 8-room Truby farmhouse at 708 Terrace Ave with their new siblings Hannah (4) and Henry (1), and of course parents Simon and Elizabeth.

By 1860, both Mary Jane and Juliana Truby were young adults in their early 20s, yet still living in the farmhouse with parents Simon and Elizabeth Truby. By now, 3 more children had joined the household, making a total of 4 adults and 5 children residing within. Youngsters included Hannah (13), Henry (11), Isabela, or Belle (8), Albert (6), and Winchester Truby (4).

A Family of Her Own and a New Home

Perhaps it’s no surprise that Mary Jane opted to break free of her father’s farmhouse within the next few years by marrying William Henry Henry, who himself was the first-born son in a local farming family. Like Mary Jane, William had lost his mother (Clarissa Henry) early on, when he was just 4 years old and his sisters Clarissa Anna and Louisa were just 6 and 3, respectively. William’s dad too had remarried and fathered an additional 11 children with his 2nd wife, Mary Talmage Henry. In fact, one of William Henry Henry’s half-brothers was local historian and physician Dr. Thomas J Henry, author of History of Apollo, Pennsylvania: The Year of a Hundred Years: 1816-1916, published in 1916 and available in print from the Apollo Area Historical Society.

Mary Jane Truby likely married William Henry Henry after 1864, when he returned from serving in the Civil War. William had enlisted in the Union’s Company I, Pennsylvania 78th Volunteer Infantry in October 1861. He was promoted to full sergeant in 1863. His military records list his occupation as Stone Mason, which was the same profession as his father, Alexander Henry (1818-1885). Alexander Henry was himself an interesting and accomplished citizen who helped to build industrial furnaces and mills in Apollo and Leechburg; read a bit more about William’s dad Alexander Henry here in this 1906 History of Westmoreland County, Vol. 2.

In 1870, the young couple Mary Jane  and William Henry shelled out $200 to purchase one-third of an acre of land from Mary Jane’s dad Simon Truby (link to a PDF of the deed). The property was located at the foot of today’s North 7th Street (then known as Second Street) in Apollo. Census records suggest that Mary Jane (age 28) and William H. Henry (age 27) were likely living in this location in 1870 with their 2 children: Harry T Henry, age 4, and Bertha Henry, age 2. Henry’s occupation was listed as working in the nearby Rolling Mill, which was across the canal and a little south of his home.

William Henry was “one of the highly esteemed and influential citizens of Armstrong County,” according to the History of Westmoreland County Pennsylvania (1906). He was a Republican, a Mason, and an active member of the Apollo Methodist Episcopal Church.

What ever happened to Mary Jane & William Henry’s house in Apollo?

Here’s a hint in the photos below…. Click here for more details and related maps/images. 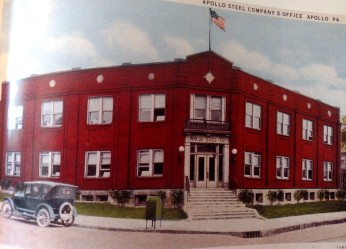 Transition and Tragedy in Leechburg

By 1880, census records show that the Henry family had moved to Leechburg, where they were closer to William’s sister Louisa and her husband Lewis Bowers. Both families—the Henrys and the Bowers—were living on Main Street in separate dwellings. Louisa and Lewis Bowers owned their home at 127 Main Street, where they lived with their 7 children, who ranged from 2 to 12 years of age. Lewis was a plasterer and had served alongside William Henry during the Civil War in Pennsylvania’s 78th Infantry.

William and Mary Jane Henry must have been renting their home in Leechburg, as I could find no Leechburg-area land purchases recorded in the Armstrong County courthouse. Thirty-three-year-old William Henry’s occupation was listed as Muck Roller (i.e., he worked in a metal/steel mill), and his 13-year-old son Harry T Henry (the “T” stands for “Truby”) was a clerk in a store. Eleven-year-old Bertha was attending school, and 9-year old Ada was at home with her mom Mary Jane, age 36. In 1881 or 82, Mary Jane and William had a 4th child, William Henry Jr, or Willie.

It’s unclear why William and Mary Jane Henry moved away from Apollo, as they retained their property there. Perhaps William had found a better job as a Muck Roller in Leechburg, or maybe he wanted to be closer to his sister and brother-in-law, Louisa and Lewis Bowers. Or it’s possible that William and Mary Jane wanted to get away from her many Truby relatives in Apollo, as there’s some evidence of both supportive and fractious relationships among Simon Truby’s 9 children and their spouses. Most of Simon’s grown children lived uncomfortably close to each other—or perhaps wonderfully near, depending on your perspective—along the edges of Simon Truby’s farmland.

In any event, the 1880s would prove to be another fateful decade for Mary Jane Truby and her family. She would first lose her husband in 1882, and then her father in 1886. Her oldest son Harry T, when only 16, had to step into a guardian role for his youngest siblings and take an entry-level job in the steel mill.

William H Henry’s death was reported in the Indiana Democrat newspaper on June 29, 1882. The article indicates that William had been up late the previous night, sitting at the deathbed of his brother-in-law Lewis Bowers. Once he returned home, William went upstairs for an afternoon nap. When a “little son” was sent to waken his father for supper, he came back and told his mother that his dad wouldn’t wake up. Mary Jane then went upstairs and found her husband dead, a suicide. “He had first cut a deep gash in his arm, and then cut his throat,” the article says. “He leaves a wife and four children.”

Another article in the Indiana Progress, published Thu, June 29, 1882, stated: “A Stricker at the Leechburg rolling mill, named W. H. Henry, recently committed suicide by cutting his throat with a razor.  Temporary insanity is said to have been the cause.” (Thank you to Lewis Bowers descendant Joyce Frey for sharing this information).

It’s hard to imagine what life must have been like for the Henry family in the immediate aftermath of this tragedy. I first wondered which of William’s 2 sons had been sent upstairs to waken him. The most likely was the youngest, Willie, who may have been only 2 years old at the time. It seems unlikely that 15-year-old Harry T would have witnessed his father’s death scene and then reported to his mom that his dad would not awaken.

Within weeks after his dad’s death, Harry T Henry was working in the shops of the Apollo Iron & Steel company, “beginning at the bottom, as scrap boy, and working his way up through the positions of opener, doubler, matcher, and rougher,” according to the History of Westmoreland County Pennsylvania.

William’s suicide at age 41  raises additional questions and opportunities for armchair speculation. The article in the Indiana Democrat notes: “The only cause assigned for his rash act was despondency. His sister is partially insane, and he seemed to fear he would become afflicted the same way.”

Which sister, we might wonder, was “partially insane” (if the article is to be trusted). Might it be Louisa, wife of the dying Lewis Bowers? Or perhaps William’s older sister Clarissa Anna (1840-1879) was mentally unstable; she had married Thompson Bair (1885-1910) and had several children. Or is it possible that William Henry was suffering from what today we would call PTSD, or post-traumatic stress disorder, as a result of his Civil War service? And what of William’s wife and children? Were they at increased risk for PTSD after witnessing the aftermath of William’s violent death? Lastly, Lewis Bowers was on his deathbed at age 43; what was he dying from? And did he die within days of William’s death, leaving their two families doubly grieving?

A lot of questions, and most will remain unanswered …. Still, some insights might be gleaned by tracking what happened next to William Henry’s widow and children. I did my best to follow the trails of Mary Jane, Harry T, Bertha, Ada, Willie, and their offspring. I also tried to track down their houses.

What did I learn? Find out in an upcoming blog post.

In essence: be assured that resilience can arise in the aftermath of adversity … hey,  that sounds like a good title for a blog article!

Special thank you to Natalie Ann Cunningham, who spent a recent Tuesday morning combing through files and binders in the Genealogy Section of the awesome Apollo Memorial Library to help gather information for this article.

As always, please comment below if you have more information about Mary Jane and William H Henry or their offspring. Please  let me know if you notice any errors in these posts as well, so I can make corrections. It does get confusing when so many people in the past have the same or similar names. For instance I ran into some inconsistencies when researching the life of William Henry Henry (1841-1882). Most accounts list his father as Alexander Henry, and there’s much supporting evidence that this is true, including in Alexander Henry’s will and writeups in the History of Westmoreland County. However, in some contemporary documents his name is listed as William Henry Jr. (such as in some Civil War records and in the deed between Simon Truby & William Henry). The title “Jr,”of course, would only be appropriate if William’s dad was also named William Henry and not Alexander Henry. There IS another William Henry (1806-1898) who lived in Apollo; he was a long-time Justice of the Peace, but it appears he had no son as a namesake. So as far as I can tell, then, William H Henry – husband of Mary Jane Truby – was the son of Alexander Henry. Just another piece of a perplexing puzzle.

Subscribe to the Truby Farmhouse blog to receive emails whenever new articles are posted.

Please help to preserve Apollo’s history by making a donation to the Apollo Area Historical Society at https://apollopahistory.wordpress.com/donate/ .